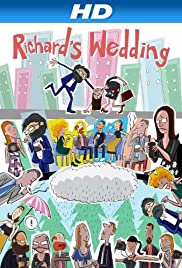 RICHARD’S WEDDING is an ensemble comedy that explores how the most enduring friendships require a mixture of envy, love and ridiculous egomania disguised as self-contempt. Alex and Tuna are on their way to Richard and Phoebe’s wedding, to be reunited with a group of old friends. As they make their trek from Brooklyn to Central Park, they’re joined by an ever-increasing number of friends with their own set of misgivings, self-righteousness, and violently annoying iPhone Apps.